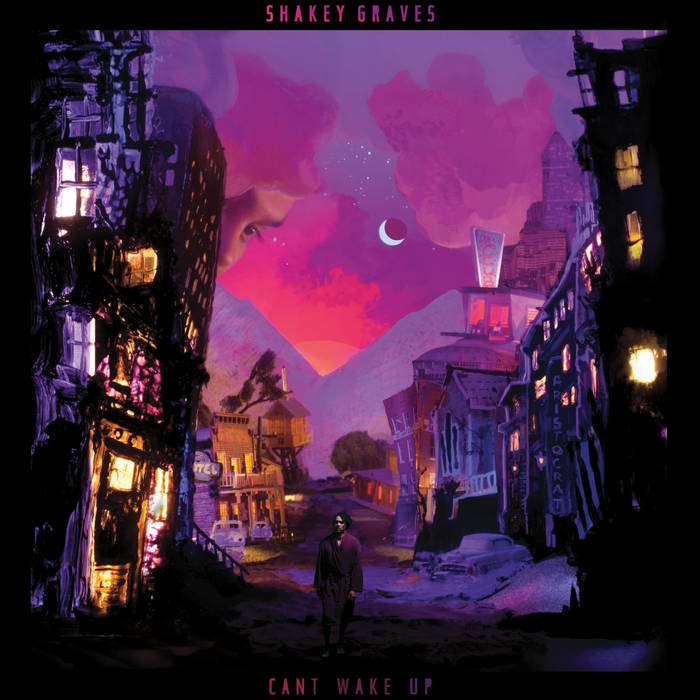 Michał Sadowski I very much can't wake up. Favorite track: Climb on the Cross.

Deweybird Awesome evolution from Shakey’s earlier album—love seeing this guy chase a new sound. Tackles mundanity through his songwriting (as in "Dining Alone") as deftly as Pink Floyd and yet does something totally his own. Favorite track: Climb on the Cross.
more...

BIO:
Back in December 2017, Shakey Graves proclaimed on his Twitter page, “Next album. New sound. Sell your suspenders.” The tweet was tongue-in-cheek, but Alejandro Rose-Garcia, the Austin native who’s been plying his trade as Shakey Graves since 2007, was making a dead-serious point about his latest album, Can’t Wake Up (Dualtone, out May 4). This ambitious, audacious work heralds an artistic metamorphosis for the 30-year-old veteran, whose risk-taking in painting outside the lines has been rewarded tenfold. “This record is the most I’ve ever intentionally worked on a project, musically speaking, in terms of the scope of it and how much thought went into it,” he says. “It’s a dense album; there’s a lot of information going on.”
That is not a hyperbolic boast. From one moment to the next, Can’t Wake Up veers from the inevitable to the revelatory, its thirteen songs teeming with jarring musical and thematic collisions and thrillingly seamless intersections, gnarly psychological hornswoggles and ecstatic resolutions. Central to the prevailing sense of disorientation are the lead vocals, none of which is purely solo. Instead, each lead performance is shadowed by a queasy harmony or slightly out-of-sync unison part, giving the sense—especially on headphones—that these voices are emanating from inside the listener’s head.
In a sense, the album is a microcosm of Rose-Garcia obsessively artistic existence and its ever-expanding horizons.

Shakey Graves Is A Gentleman From Texas.

Bandcamp Daily  your guide to the world of Bandcamp